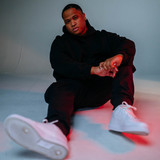 22 year-old Aaron Cole started rapping when he was just three years old. Since then, he’s garnered the coveted Dove Award for New Artist of the Year, held 3 #1 singles on the Billboard Christian HOT AC/CHR chart and has had multiple sync uses including promos for ESPN and Fox Sports. His songs have also been featured in the Netflix original series, “On My Block” among other prominent sync placements.   Named “One of 5 Top Gospel Artists to Watch” by Essence Magazine, Cole’s musical journey included releasing six independent projects prior to his signing with Gotee Records. The Bristol, VA, native was then introduced to multi-GRAMMY-award-winning producer and artist TobyMac, who has been working with him ever since.   “Aaron Cole is where it’s going, He’s a natural,” TobyMac said. “He wakes up and breathes songs that are culturally relevant, but ever aware of the spiritual. He just gets it. He has a deep love for God and a love for people that organically works its way into the lyric. The Lord has blessed him with a deep well of talent, yet he grinds like he’s ungifted. That’s a rare combination that I will lock arms with anytime, anywhere.”   Cole hasn’t stopped pursuing his dream. This latest releases, "4" & “Only U Forever” certainly add more songs to his growing catalog of impactful music.