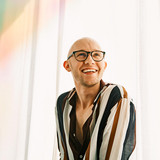 American pop singer Lyon Hart makes heartfelt and moving music that draws on influences such as Sam Smith, Years & Years, and Troye Sivan. In 2015, he began collaborating with producer Mickey Valen, co-writing and producing for other artists including EVVY, Noosa, and Jojee. Mickey Valen and Lyon Hart’s collaboration led to the first Lyon Hart EP, With or Without Me which was released in 2015. After the release of With or Without Me, Lyon Hart became an in-demand featured vocalist for many rising stars of dance/EDM including Elephante, Milk N Cooks, Loosid, Keljet, and many others. Other co-writes and collaborations include “One Tree Hill” star Bethany Joy Lenz, The Voice Top 8 contestant Erin Willett, Danny Ayer, CKAY, and KNGDAVD. Some of the songs written for other artists would eventually become solo singles for Lyon Hart, including the breakout viral hit, "Falling for You", which, to date, has over 25 million views on it’s smash music video. Followup singles, "Delusional" and "Half Light" garnered rave reviews from critics.