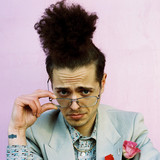 Benjamin Fro is an Amsterdam based singer-songrapper that combines critical lyrics with soulful beats. Kendrick Lamar, Noname and Chance the Rapper are among his musical influences but he shares his message with Bob Marley, Logic and Laurynn Hill. His music and lyrics are made to bring different musical genres and people together. He and his liveband will wake up any audience. On the 24th of February 2017 Benjamin Fro released his first solo album: Praten Over Leven. The album is jam-packed with hip-hop grooves and references to other rappers and philosophers and singifies Fro’s introduction to philosophy and the influence this had on his personal life. A busy year followed with many shows, a small hit in Poland, a viral poem during the Dutch elections, a score for the documentary ‘I Love My Muslim’ and more than 400k streams on Spotify. On the 8th of February 2018 Fro released his second album ‘Behave’. The album is a critique on the Dutch ‘normaal-doen’ (act-normal) mentality and contains a ton of catchy hooks and cultural criticism. In 2019 Benjamin Fro tells the story of a millenial who struggles with identity, gentrification, love and spirituality in a world that values money and status over everything else. The story will be told in different parts, the first of which is titled Everybody and is set to be released on the 28th of March. The second part: In the City will be released on the 22nd of June with an XXL liveshow in de Melkweg.