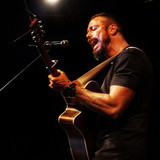 Gareth Icke is a singer/songwriter, author, personal trainer & former international beach soccer player based in Derby, England. Gareth is currently writing his forth album. It's set to be recorded in 2018, and will be a break from his normal 4 piece band sound, in favour of a more stripped back, acoustic sound. His third album, 3, was released in June 2016. In 2016/2017 Gareth performed the record across the Globe, with shows in the USA, Switzerland, Italy, Germany, Estonia, Holland, Serbia, Slovakia, Slovenia, Canada, Croatia,

Czech Republic, and the UK. The album was played for the first time at the O2 Brixton Academy in London. It is received great interest because it has been recorded in the frequency of 432hz instead of the usual 440hz.