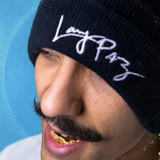 Larry Paz is a Brazilian-American artist, from Broward County, FL. He began his music career creating comedy songs which led him into creating His first single "Drive Fast". It spread quickly online as he and his team (Uhoh Marty, Uhoh Nick, Aramis Official, Don Freshly and more) paved a new lane on youtube. His first ep "Red Salute" was produced entirely by him and his team in their own studio "Uhoh Studios" which created a local buzz. His vision became more clear after he went on tour with Ace Hood as a Creative Director & Photographer. This was just a taste of what tour life is all about. After two months on tour Larry Paz returns to the studio and began working on his Latest album, "Something Good" which was named with the help of his fans. "2020 is the year to create anything and everything I believe in, there's nothing I can't do". He has recently previewed tracks like "Dopamina", "Never let you down" and "Far From God" on social media which made fans from all over world really excited for his newest self produced album "Something Good".