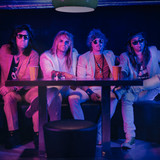 Reckless Love is back and ready to conquer the world! Highly acclaimed single ”Outrun” took us to 80's game world. New single "Eyes Of A Maniac" continues with same theme and is out now. New album will be released on 2022 via AFM Records. A Finnish glam rock/metal band based out of the Northern Savonia city of Kuopio, Reckless Love were originally formed in 2001 as a Guns ’ n Roses cover band under the name Reckless Life. By 2004 they were writing and performing their own Sunset Strip-inspired sleaze rock under their current moniker, with which they took home the top prize at that year's Kuopio Band Competition. In 2009 they inked a deal with Spinefarm/Universal and released their first major-label single, "One More Time," followed in 2010 by their eponymous debut studio album, which entered the Finnish National Charts at lucky number 13. Released in 2011, Animal Attraction made an even bigger chart impact, securing the number ten slot, while 2013's Spirit proved to be the band's biggest hit to date, peaking at number three. InVader, Reckless Love's fourth studio long-player, dropped in early 2016.