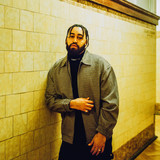 South-West Sydney's B Wise stands at the forefront of a new cultural movement. His 2018 debut album 'Area Famous' has been described as a landmark record; a moment when the Australian rap scene shifted, expanded, opened up. It won him FBi Radio's 'Record Of The Year' and 'Best Independent Hip Hop Records' at the 2019 Australian Independent Recording Awards. But B Wise's rise didn't happen overnight. In the years leading up to this critically acclaimed album, the Nigerian-Australian artist released a string of genre defining singles which showcased storytelling skills far beyond his years, which were embraced by the likes of Complex UK, Rap Nation and triple j (Australia's biggest youth radio network). The latter has heavily embraced B Wise, spinning multiple songs in high rotation inviting the young artist to perform on their coveted Like A Version show, which saw him transform Red Hot Chili Peppers 'Under The Bridge' into a deep and uplifting modern day anthem. His catalogue currently has over 12 million streams and counting across services. B Wise's intensely energetic performances have earned him a rep as one of the best live acts in the country, seeing him play the biggest festivals and supporting international artists such as Jay Rock, Schoolboy Q, Yelawolf, Vince Staples, G-Eazy and Freddie Gibbs.