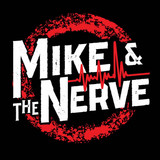 Punk rock was born and bred into Gainesville natives Mike & The Nerve. Shaped by a local punk scene which spawned such acts as Against Me!, Hot Water Music and Less Than Jake, frontman Mike Llerena began contextualizing his influences, mixing classic rock with punk and folk — with acts like The Gaslight Anthem and Frank Turner serving as constant reference points in his songwriting.

Starting out playing shows and recording music under his name, Llerena has grown Mike & The Nerve into a full-fledged band, which now includes drummer Josh Napier, backing vocalist Garret Pogue, guitarist/backing vocalist Eli Garland and bassist James Conlin. Llerena explains “The name ‘The Nerve’ refers to both the idea of nervous energy and having ‘the nerve’ to go and do things that seem personally insurmountable, both of which are topics referenced in a lot of the band’s lyrics.”   The band have just released their sophomore studio album “Watershed Drive”, co-produced by longtime collaborator Jared Pennock.