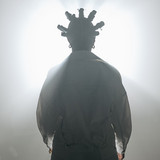 When she first appeared on the mainstream music scene in 2016, Nadia Rose seemed fully formed. A powerfully confident artist with a singular vision, she was as adept as coming up with striking visual concepts for her videos as she was cracking jokes, dancing, singing, or of course, rapping. When her inescapable, effervescent hit 'Skwod' went viral, the press immediately began hailing her as UK hip-hop's next major star. That kind of self-assured debut was only possible because Nadia had been quietly working on her craft for years before she hit the spotlight. Nadia was born in 1993, and grew up on the Whitehorse Road Estate in Croydon; a place where she was surrounded by music, and by family (her cousin Michael Omari, now better known as Stormzy, lived just up the road). As 2016 drew to a close, Nadia racked up a prominent feature on Kideko and George Kweli's 'Crank It', which brought her main stage festival bookings around the world. She won a MOBO and finished in the Top 5 of the BBC Sound of 2017 poll. At the top of 2017, she released her first EP, Highly Flammable, which The FADER called "a showcase of Rose's dexterity". Throughout 2017, Nadia was writing for Rihanna, who continues to be one of her biggest supporters - even promising to collaborate with her on a track in the near future. The process allowed Nadia to unlock a "different level" in her song writing, which will be unleashed as she continues to drop new material over the course of 2020.