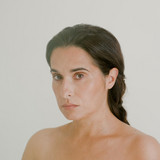 Cristina Branco is one of the most important Portuguese artists of recent decades, with a total of 17 albums released and countless concerts all over the world. Her most recent work, Eva (2020) has won over the public and critics alike and confirmed Cristina as one of the most versatile performers on the Portuguese music scene. She began her career in Holland, with the album Cristina Branco in Holland (1997). In the following years, Cristina’s name exploded throughout Europe, with sold-out dates in countless venues and cities. Considered Best Record of the Year by Sociedade Portuguesa de Autores (SPA), Menina (2016), is the first chapter of a trilogy that includes the jovial and kaleidoscopic Branco (2018) and Eva (2020). In these works, Cristina brings together unusual collaborations, which cross styles, genres, cultures, and geographies. The result is an innovative and spontaneous interpretation of the traditional musical expression of Fado. Today, on the verge of celebrating 25 years of career, Cristina Branco shows herself exactly as she is, a true, free and genuine woman. Fado will always be present. Cristina brings it in her senses.