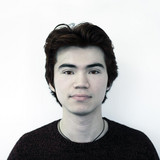 Matthew Entwistle is an award-winning British pianist and composer based in Edinburgh, Scotland, and formerly New York City. By virtue of his lifelong training as a classical pianist, his musical style is infused with the classical music tradition. The music of Franz Schubert, Sergei Rachmaninoff, and George Gershwin are particular influences. Matthew's style also incorporates strong influences and elements from film, pop, rock, jazz, and sound design, as well as immersive multimedia in live performance. While based in New York City, Matthew earned his degree in physics and music composition at New York University. Film/TV scoring was a large part of his professional life, having collaborated with and written music for numerous directing talents from the NYU Tisch School of the Arts, NBC's Saturday Night Live, and other national organizations. When he is not writing and performing his piano music, Matthew is researching and developing artificial intelligence tools for the music compositional process, creating greater opportunities for musicians to make their mark on the sonic world.