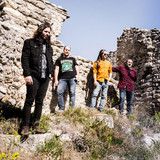 Pyramidal is a psychedelic space-rock band formed in late 2009 in Alicante, Spain. Their influences come mainly from progressive and psychedelic rock. Their first work came up at the end of December 2011 under the title “Dawn in Space”, a seven track LP mostly instrumental, full of otherworldly sounds and obscure psychedelia. Back in 2013 they released their sophomore studio album, “Frozen Galaxies”, which mixes their spacerock influences with some heavy and progressive rock passages. “Live Freaks” is their third album, recorded live at Freak Valley Festival (Siegen, Germany) and edited by Lay Bare Recordings (The Netherlands). In 2015 they released an split alongside Domo, a brotherhood band of Alicante psychedelic scene, “Jams From the Sun” mainly a recording of jam sessions that reveals its most influenced Kraut side. Later on 2016, some of the recordings not included in “Jams From the Sun” were released as a box containing the EP “From Other Spheres” and the maxi-single “Sabbra Arabia” edited by Krauted Mind Records. Their latest release is a double live album recorded in 2014 at the Psychedelic Network Festival, Würzburg (Germany), edited by Sunhair Records. Along these years they have been playing in several festivals through Europe and Spain, such as Roadburn (The Netherland), Yellowstock (Belgium), Freak Valley Festival (Germany), Psychedelic Network (Germany), P.S.I Fest (Germany), Stonefest (Spain), Volcano Sessions Vol.4 (France).