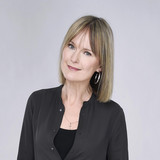 Authority, sensuality, always a sense of melancholia to her reflections on everyday life. All of this has resulted in Cajsa Stina Åkerström becoming a longstanding star of the pop/folk scene of Sweden. Åkerström, born in Stockholm 1967, made her album debut on Warner Music in 1994. Before that she had focused on archeology and had also been a museum employee. When she finally, at 27, presented her first songs it came to a surprise to some that she’d more or less steered away of the folk music that had made her father Fred (1937-85) an everlasting icon of the Scandinavian scene. Instead she delivered pop music with an electro edge. The success was immediate. Her 1994 debut album was awarded double platinum and presented several hits including “Fråga stjärnorna”. Åkerström released in all four albums at Warners. She started her own Calimba label in 2004. In 2014 she entered the trials to the Eurovision Song Contest with the song “En enkel sång”. This was the first result of a cooperation with songwriter/producer Peter Kvint that the year after resulted in the album “Vreden och stormen” – her biggest success in years. They continued on the 2019 album “XXV – Äventyret börjar här” and the 2020 single “Nattunn is”. New music is scheduled for late 2021. Åkerström published her first novel in 2010. The novel, partly autobiographical, included memories of her infancy with her beloved but at times problematic father. In 2021 she presented her first exhibition as a painter.