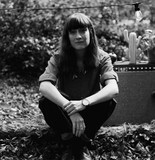 Bryde grew up in West Wales looking at Cleddau Estuary through a gap in neighbours’ houses. She plunged straight into the world of music the moment she hit double-digits and has been inspired by her home town's sea and mountains ever since.   After spending her 20s playing with folk duo Paper Aeroplanes, touring UK and Europe extensively, the switch to playing solo electric guitar as Bryde, seemed like a natural progression.   Described by the Sunday Times as “Feral Guitar, Torn-from-the-chest lyrics...sensational"   Bryde’s solo debut album ‘Like An Island’ was released in 2018 and nominated for the Welsh Music Prize.   Compared to everyone from The Cranberries to Lucy Dacus, her second album The Volume of Things was released during lockdown in May 2020 described by Pitchfork as, "songwriting strong enough to make every moment distinct".