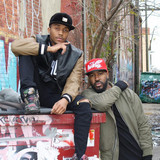 21:03 began in 2003 when gospel production team PAJAM (Paul “PDA” Allen and J Moss) held an audition in Detroit for a vocal group with contemporary hip-hop/R&B image. Evin Martin and Torrence Greene were chosen and the group began work on debut album “Twenty One O Three”,

which surfaced on Verity Records in 2006. Winning a Stellar Award, the Top 20 debut on Billboard’s Top Gospel Albums chart led to the immediate follow-up of “Total Attention” in 2008. The set was a Top Five success on Billboard’s Top Gospel Albums chart. The album housed the Top Three Billboard Hot Gospel Songs single “Cover Me”. The single garnered the group their first Grammy nomination. Third album “Evolved..From boys to Men” followed in 2012 additionally garnering a Top 20 debut. After a brief hiatus, 21:03 released the EP “Outsiders” which shot straight to the top of the Billboard Top Gospel Album’s chart debuting at #1 in 2015. Now in 2020, the men of 21:03 have decided to give it a go one last time. Their fans span demographic and country boundaries and they are eagerly awaiting new music. The first single “Never Let Me Down” serves as a reintroduction for the pre distinguished duo and preludes a full length LP that is sure to be the period at the end of an illustrious career. As trailblazers for many of today’s current inspirational and urban contemporary gospel artists, 21:03 is poised to put their brand of gospel back on today’s current playlists.