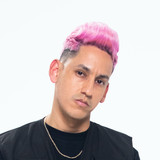 J Rythm, is a Mexican/American producer, DJ & musician based out of Los Angeles where his music career began playing nightclubs at the age of 20. Now he has toured in Spain, Mexico & all across the US from Las Vegas to Chicago, including DJ sets at the Latin Grammys, Billboards & AMAs official after parties. He is well known for his upbeat & unique remixes which has led him to officially remix for artist such as Maluma, Pitbull, Prince Royce, Avicii, Raymix, Juanes, Kane Brown & Becky G. His music is heard all over the clubs, radio mixshows and is supported by acts such as DJ Snake, Sak Noel, ETC!ETC!, Fight Clvb, 3BallMTY, Broz Rodriguez & many others. His weekly show RITMOLUCION on Pitbull’s Globalization SiriusXM has gained a lot of attention from artist, DJs and listeners world wide. Has had in studio guests such as Becky G, Kali Uchis, CNCO, Paloma Mami, C. Tangana, Justin Quiles, Myke Towers, Ms Nina & Henry Fong just to name a few. J Rythm continues to flood the scene with his music spreading his sound & energy throughout the world. With his most recent release “Cheke” alongside Panamanian DJ/Producer Gian Varela, Dominican recording artist Jenn Morel & Italian rapper Boro Boro released under his own label imprint RITMOLUCION in partnership with We Are Musik distributed by Ultra Music & Altafonte Italia.