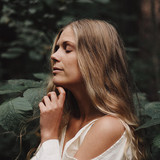 Based in Sweden, Fia Forsström (known mononymously as Fia) is a folk pop singer/songwriter who with her inspirational lyrics, empowering songs, and catchy melodies quickly enchanted hearts all over world with the release of her solo debut ”Made of Stars” in 2016 which was crowdfunded together with her fans. Building a solid platform through social media and word of mouth, Fia took her place as one of the leading voices on the singer-songwriter scene with ”Legacy of Light” (2017) and ”Waterfall of Wisdom” (2019), both of them recorded and released with the help of her loving listeners.   Fia was born in 1994 in Kista, Sweden. She began playing the oboe and writing songs at the age of 10. During her teenage years she picked up the guitar and piano being part of different ensembles while attending the music program at Westerlundska High School. She released her solo debut ”Made of Stars” in 2016 independently with the support of fans, and in 2017 Fia garnered even more widespread acclaim with the follow up ”Legacy of Light”. At this point Fia was a known name and her star continued to rise with ”Waterfall of Wisdom” released in 2019 which wrapped up the acoustic album trilogy. In 2020, her music was featured in a meditation app developed by the University of California Santa Barbara Center for Mindfulness and Human Potential, bringing her songs to high school students all over the US.