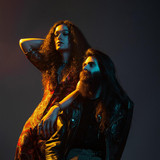 Crown Lands’ self-titled debut album, produced by Grammy-nominated Dave Cobb, was released in the summer of 2020, to widespread acclaim from the likes of Guitar World, Kerrang!, and American Songwriter; coverage from the BBC and the CBC. Crown Lands then stormed into 2021 with two songs, “Context: Fearless Pt. 1” and “Right Way Back,” that returned them to their prog-rock roots and pointed the way to a limitless future, while also connecting the group to their legendary countrymen, Rush, after working with three prolific Rush producers – Terry Brown, Nick Raskulinecz and David Bottrill on the tracks. Most recently, Crown Lands received 2 x 2021 Juno Awards nominations, for Rock Album of the Year and taking home the award for Breakthrough Group of the Year. The band also signed a deal with Spinefarm Records, to support their upcoming releases in the U.S. and U.K. Hailing from Southwestern Ontario, powerhouse Canadian rock duo Crown Lands are a startling fresh jolt of energy, making music that brings together a range of influences from folk and blues to psychedelic prog rock. The group’s name is indicative of their musical ambitions: “Crown Land” is territorial area belonging to the monarch—or, as Bowles (whose own heritage is half Mi’kmaw, an Indigenous tribe from Nova Scotia) puts it: “Crown Land is stolen land and we are reclaiming it.”