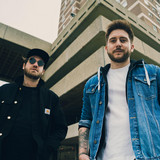 GEST - previously known as Gerra & Stone have risen rapidly through the Drum & Bass world over the past decade. Recently joining the Shogun Audio family, the duo have regrouped with a rejuvenated, heavier rolling sound than their previous offerings, taking influence from early Detroit techno. With previous releases on critically acclaimed label as Ram and Shogun, alongside underground tastemakers like Dispatch - it’s fair to say their production style thrives on diversity and will continue to do so under their new identity.