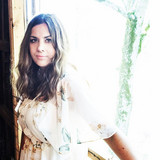 Since her first album Seasons Of My Soul landed in the Top 3 of the UK Albums Charts in 2010, achieved Platinum sales status and garnered her a MOJO Award for Best Breakthrough Act as well as two BRIT Award nominations, British singer-songwriter Rumer has gone on to forge an acclaimed career both as a highly regarded songwriter, penning global hits such as “Slow” and “Aretha,” and also a peerless interpreter of the work of others, as evidenced on her follow-up album Boys Don’t Cry – an album of classic covers from the 1970s – plus Rumer Sings Bacharach at Christmas and This Girl's in Love: A Bacharach and David Songbook. Rumer spent the past several years living in the American South, in northwest Arkansas, then central Georgia, where she embraced its community and culture and motherhood. Although she enjoyed her time out of the spotlight, her deep-seated desire for music discovery, which has been a constant throughout her career, eventually led her to Nashville in search of hidden gems to record. Once she heard the catalogue of Nashville Songwriters Hall of Fame member Hugh Prestwood, a songwriter whose name is spoken with reverence by his colleagues and whose work has been recorded by transcendent singers like Alison Krauss, Trisha Yearwood, and Judy Collins, she was hooked. Her latest album, Nashville Tears collects fifteen of Prestwood’s finest songs, many never recorded until now, revealing truths of the heart, both intimate and universal, realistic and romantic.