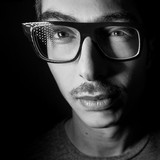 Southern Italian producer Marco Erroi is the name behind such projects as Common Series and XXXV gold fingers. Varied yet vital to the local scene, this vinyl addicted DJ is also co-founder and owner of Common Series Ltd (a label which only puts out his own music) and itinerary House/Techno events Squat Party - which plays out in various secret locations in the local region. His influences are open to a wide variety of music, all absorbed during twenty years of passionate work in the field. His tracks mix the organic and the synthetic, right through the environmental and the fantastical. In addition, he uses a combination of field-recordings, guitars, vocals, hand-tambourines and synthesizers that make for earthly electronic music - both cerebral and visceral. As a selector, Erroi creates unique DJ sets infuses of house, techno, afro, acid, ambient and concrete grooves - all played with an old-school aftertaste.