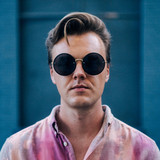 A native of Purcell, Oklahoma, Millsap has released four albums to date and has quickly made a name for himself with his captivating live performances, soulful sound, and character-driven narratives. He's had a string of highlights in recent years including his network television debut on CONAN, a performance with Elton John at the Apple Music Festival in London, an Austin City Limits taping, and an Americana Music Association nomination for Album of the Year. He has also received praise from The New York Times, Boston Globe, LA Times, Austin Chronicle, and Rolling Stone to name a few. His latest album Other Arrangements released in 2018 via Thirty Tigers. The Associated Press said "Parker Millsap rocks harder than ever on his fourth album" and Rolling Stone called it his "tightest, sharpest and most infectious set of songs to date."