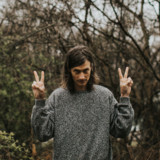 Georgia-born T. Hardy Morris (also billed as Hardy Morris) first came to fame as the guitarist and singer with the psych-influenced, defiantly Southern hard rock band Dead Confederate. After Dead Confederate's breakup, Morris made a name for himself on his own with his solo debut Audition Tapes, a low-key set of buzzy, country- and folk-inspired rock. Morris veered into harder rocking territory on 2015's Neil Young-inspired Drownin' on a Mountaintop, while he explored darker and more personal themes on 2018's Dude, The Obscure. He's also recorded with the rollicking ad hoc group Diamond Rugs alongside members of Deer Tick, the Black Lips, and Los Lobos. Formed in Augusta, Georgia in 1997 by Thomas Hardy Morris and longtime friend Walker Howle, Dead Confederate slowly evolved from a jam band called Redbelly that favored 20-minute improvisations to a tighter, more ambitious group thanks in part to Morris' growing skills as a songwriter. Dead Confederate landed a record deal in 2007, and thanks to steady touring and a handful of strong records became one of the leading bands on the roots rock underground. Despite Dead Confederate's busy schedule, Morris had more than enough musical ideas to go around, and in 2011, his friend John McCauley of Deer Tick invited him to join a side project featuring Ian St. Pé of the Black Lips, Steve Berlin of Los Lobos, Bryan Dufresne of Six Finger Satellite, and McCauley's bandmate Robbie Crowell. Dubbing the project Diamond Rugs (or D. Rugs for short), the quintet released a self-titled debut album in 2012. and a second LP, Cosmetics, in 2015. In 2013, Dead Confederate had broken up following the release of their album In the Marrow. By that time, Morris had accumulated a number of songs that didn't fit Dead Confederate or Diamond Rugs, and he opted to make his first solo album. Audition Tapes, credited to T. Hardy Morris & the Outfit, was released only three months after In the Marrow, and revealed a different side of his music, with a looser and more languid tone than he showed in Dead Confederate. In 2015, Morris dropped a second solo effort, Drownin' on a Mountaintop, this time under the group name Hardy & the Hardknocks; it was a more decisively rockin' effort that showed the strong influence of '70s country-rock. Morris explored significantly darker and more philosophical themes with his third solo effort, 2018's introspective Dude, The Obscure. ~ Mark Deming, Rovi