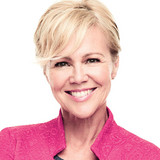 Anne accompanies herself on the piano with remarkable grace and elegance, while singing melodies that are both touching and true to heart. A strirring combination of poetry and jazz, melded with a warm voice that thrills and enchants from the very first note. For her 6th album in 10 years, Anne called upon the talent and services of two ‘Giants of Jazz’: on drums, Joe LaBarbera, who has worked notably with Bill Evans and Chuck Mangione, and on acoustic bass, Darek Oleszkiewcz, who has worked with, among many others, Brad Mehldau and Sid Jacobs. Anne asked Producer/Recording Engineer Michael C. Ross to co-produce the album with her. Diana Krall, Queen Latifah and Christina Aguilera are some the many prominent artists he has worked with. The results are absolutely amazing. A mature, yet sparkling album that will not only satisfy the stringent expectations of her loyal audiophile fanbase, but will undoubtedly attract a whole new generation of admirersafraid to challenge the boundaries of jazz and popular music. July, 2019 saw Anne perform with a full symphonic orchestra in France and in August, she will be embarking on an Asian tour, with stops in Hong Kong, Taipei, Taiwan and Guangzhou, China, revisiting venues where she has known remarkable success in the past. In September of 2019, Anne was awarded the prestigious Robert Charlebois Grant, sponsored by Power Corporation for the unqualified success of her brilliant career on the international scene.