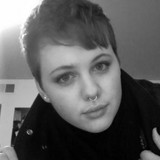 Liz McDaniel is a Michigan-based singer-songwriter. She wrote, performed, and produced her 2012 releases–her full-length album 'Rearranging' and her two EPs. McDaniel wrote many of those songs during her first year as a college student, and has described them as being about "the change, growth and rearranging one does as a person." After frequenting local open mic nights, McDaniel performed actively around the Lansing, MI area from 2009-2013. She played shows with acts such as Doug Mains & the City Folk, Nathan Alan, Hailey Wojcik, and UK artist Benjamin Francis Leftwich.