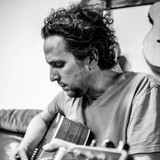 Scott Warren's fourth solo release, "Shadow Bands" (2021), is a guitar rock focused affair that ranges from Power Pop to Beatle-influenced Psychedelia. Warren handles the vocals, guitars and the lion's share of keys while Brian Young and Mark Crozer of The Jesus & Mary Chain hold down the rhythm section. Here's what the press is saying.. “To my ears, Left Out On The Joke is early Blur meets T. Rex…If you can imagine that!

I need to further investigate this talented chap!” - KOOL KAT MUSIC “A song like Mountainside is great West Coast McCartney Pop...But the stand out is the magnificent Left Out On The Joke…It is a top notch 3 minute upbeat affair that demonstrates why any fan loves pop.” - HEAR A SINGLE “Scott Warren has made a fantastic new record. Ten pop songs, which all differ slightly in taste, make me want to play Shadow Bands repeatedly.” - SWEET SWEET MUSIC “Adding a touch of Beatle-influenced psychedelia, the opener “Press Reset On The World” blends a little “I Am The Walrus,” a little Oasis strut, and thickly layered rhythm section into a bold statement that really rocks.” ... “Overall, a terrific album that gets better with each listen. It makes my top ten list for 2021. Highly Recommended. 9/10." - POWERPOPAHOLIC “Warren’s songs are soulful, intelligent and melodic, his production and arrangement skills hit all the right notes and he has a burnished everyman singing voice that conveys intimacy without being emotional.” - BIG TAKEOVER