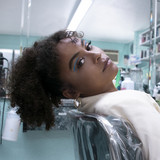 Danitsa was born in Paris in a family where music has always played a major role. At the age of 10, she began to sing on compositions of her father “Skankytone”, a lover of Jamaica and Reggae. Through her mother, she discovered Soul, Funk and Hip-hop. It is at the crossroads of these influences that she developed herself as an artist, between John Holt’s and Horace Andy’s Reggae and Erykah Badu’s Soul. In 2008, she moved to Geneva (Switzerland) and met the Little Lion Sound collective with whom she recorded dubplates that went viral. A bit later, she recorded the single « Good Coffee » with Di-Meh. The song also spread rapidly and was heard by several tens of thousands of people, even reaching all the way to South America. After a few mixtapes and EPs (Five Flags, Breakfast EP, Shelter EP), she then released her first album “EGO”, in late 2017, bringing a new sound to the actual musical landscape. The songs “Captain” and “Remember Me” became instant hit-singles in Switzerland and were listened millions of times all around the world. The album was played on national radios and rewarded with a Swiss Music Award (Best Act Romandie). Additionally, it allowed her to set up a tour with more than 100 performances in Switzerland, France, Belgium, Spain, Netherlands and USA. Danitsa is currently finishing her second album recorded for six months in Los Angeles. She composed it with local and international artists, expanding her inspirations and building up her artistry.