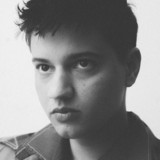 Mavi Phoenix is an artist from Austria. He began producing, singing and rapping at just 11 years old. From there he developed his own distinct style of music production. In 2019 - still regarded as a female artist - he was in Austin to play some showcases at the iconic SXSW festival when he recorded his transgender coming out video. While last year was a tremendous blow for so many artists, Mavi Phoenix used the time to complete his gender transition, redefine his artistic vision, train his voice through its evolution of hormonal changes and write new songs locked down in his bedroom in Vienna. Now he flourishes as a newborn guy and releases the single ‘Leaving’ after having dropped ‘Grass And The Sun’, 'Nothing Good' and 'Tokyo Drift' earlier this year. Currently in his mid-20s, as a producer, songwriter, and performer, Mavi Phoenix has never been afraid to blaze his own trail. His genre-mashing EPs and album debut have drawn unexpected links between pop, hip-hop, and electronic sounds, and listening to them in sequence can feel like a thrilling plunge into a selection box of assorted musical treats. During the long months of lockdown, Mavi discovered the guitar as his new main songwriting tool, and once again brought to life a completely new side of his musical journey. He created a new body of work, now blending indie-folk-rock and pop in incomparable fashion.