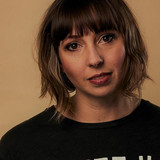 Mardi Lumsden is an dream-folk/alt-folk singer-songwriter from Brisbane, Australia. She mostly writes sad songs that sound happy. Her debut LP, Hiatus (released 27 March 2020), was recorded by husband Andrew Pennay in their home (a converted church). In fact, her last EP, Wherever you go, there you are was also recorded in a converted church. It might be her thing. The single 'This is forever' won high praise from Triple J's Home & Hosed host Declan Byrne saying, "It's a driving indie mix but the subtleties won me over. Touching stuff." The single 'Heading home' featured on Double J's Tower of Song with Henry Wagons. Mardi has played everywhere from Brisbane to Bethlehem, London and Dublin to Sydney and Melbourne. A self-confessed songwriting nerd, her music captures the simplicity and intricacies of human nature. Mardi’s songs are lovingly crafted; weaving stories together using banjos, keyboards, synths and other instruments friends (and strangers) have passed along.