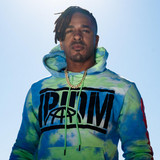 International singer, songwriter, and Recording Academy/GRAMMYs Voting member ‘Matt B’ was born and raised in Chicago, IL. He released his Japanese debut album “LOVE & WAR” in September 2014, and it went #1 on the iTunes R&B Charts. His sophomore album “DIVE” released in January 2016 and also hit #1 on the iTunes R&B Charts. After reaching critical acclaim in Japan, Matt’s imprint continued to spread overseas. His single ‘Color Blind’ went viral in China, accruing over 158 million streams on the NetEase platform.

Matt signed with Priority Records on March 2017. He released his 4-track EP ‘RISE’ in April 2018—which was produced exclusively by Bryan-Michael Cox. His single ‘Ain’t Too Proud’ charted at #4 and #67 in Taiwan and Japan respectively on Apple Music, and also charted at #35 in Latvia on Spotify. In 2019, Matt B partnered with Sofar Sounds for a 16-date nationwide tour that spanned across eleven cities in the US. Following the tour, Matt had his nationwide television debut as he performed at the 2019 Magnificent Mile Lights Festival. In December 2019, he released his EP ‘No Days Off’--which also featured Recording Academy Chicago Chapter President, J. Ivy. The EP charted at #71 in Taiwan. Matt B released his debut US album, EDEN, on March 12, 2021. It immediately ranked #3 in the US and #5 in Canada on the iTunes R&B Albums Chart. 'EDEN' also debuted in the Top 40 for R&B Albums on Billboard. It features production from Bryan-Michael Cox and Tricky Stewart.