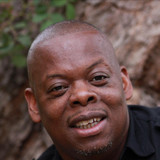 A British dancehall MC who launched his career in the '80s, Tippa Irie remained active long after ragga's heyday, traveling to the top of the charts with a guest shot on Black Eyed Peas' 2003 hit "Hey Mama" and working with jam bands like Long Beach Dub All-Stars. Born Anthony Henry, Irie was born in Jamaica but raised in Brixton. Tippa grew up watching his father running a sound system, Musical Messiah, and fell in love with some of the visiting artists. Dennis Brown and Dillinger were his favorites, and they got a lot of airtime when Tippa joined his own sound system, Saxon Studio International. At Saxon, the young artist worked with fellow MCs Smiley Culture and Papa Levi along with singer, and future superstar, Maxi Priest. In 1984 he broke out as a solo artist with a string of singles on the UK Bubblers label, including "Complain Neighbour" and "Heartbeat," both of which landed on his 1986 debut, Is It Really Happening to Me. In 1988 Fashion Records issued JA to UK MC Clash, Vol. 2, a recorded soundclash between the MC and Papa San. It was a popular and influential release with U.S. rappers and producers, who were already familiar with Tippa through bootleg tapes of Saxon. In 1989 his Ah-Me-Dis album was released by the U.S. label I.R.S. Records, while Original Raggamuffin from 1990 found him on the Island Records imprint Mango. He recorded the 1994 LP Rebel on the Roots Corner for Mad Professor's Ariwa label, then in 1999 he joined the California rock-reggae crew Long Beach Dub All-Stars on their album Right Back. After Jahmin' Records issued his solo album I Miss in 2000, will.i.am contacted the singer in 2003 for an (uncredited) appearance on the Black Eyed Peas single "Hey Mama." Four years after the BEP hit reached the top the charts in multiple territories, Tippa released his album Talk the Truth on LockDown Productions. An underground dubstep collaboration with producer the Bug landed on the latter's 2008 album London Zoo, then in 2010 LockDown released Stick to My Roots, Tippa's album with Gentleman's usual backing crew, the Far East Band. ~ David Jeffries, Rovi