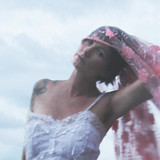 To capture Valentina Brave's voice and music is to hitch a ride in Persephone's Ute, having burned across the darkest night of the soul, picked up the Virgin Mary herself, with Betty Davis on the bonnet. Her vintage rock, murder ballads and cinematic soul anthems come directly from the underworld. These are transformative songs where Brave makes vulnerability her ally. A powerful medicine in these times.   Valentina Brave has shared the stage with global luminaries such as Michael Franti, Jackson Browne and Juanes. Her live performance is always met with overwhelming response as her name is becoming synonymous as a powerhouse vocalist, songwriter, improviser and world class multi-dimensional artist. Valentina Brave’s Debut EP Wildflower, is a cathartic release, an expansive portrayal of what happens when you let your wounds speak. Produced by Aria nominated Artist Danielle Caruana (Mama Kin), her EP WILDFLOWER is a visceral expression of what grows from the human heart and an incredible debut from a breathtaking multi-dimensional artist. Wildflowers grow unapologetically, sprung from dust, their beauty bleeding freely into the world. Like these, Brave is a dynamic feminine force.