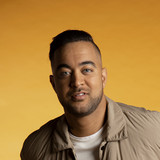 As winner on The Voice Season 9 in 2020, mentored by Kelly Rowland, Chris Sebastian captured the attention and the hearts of Australians nationwide, both for his incredible talent, and his gracious, likeable nature. His progression through the show showcased his diverse skill as a singer, musician and writer; the complete artist in his own right. Australian viewers were drawn to him through not only his stunning vocals, but his trademark honest connection with his audience. Chris Sebastian first found his voice and love for music at a very young age. This passion has never left him, and today Chris has honed his craftsmanship of songwriting alongside the industry’s best, writing for major artists and labels and developing his own unique style. Chris receives an overwhelming response everywhere he performs – both across his homeland of Australia, and around the world. He has toured as support to some of the world’s best, packed out his own headline shows, and more recently toured with Aussie electronic music duo, Peking Duk. An electric performance, striking vocal technique, and a passion for his audience: this is what you can expect from Chris Sebastian. New single 'Wasted On Me'

is Sebastian’s second single release for 2021, following on from the undeniably catchy 'Hard To Get To Love'.