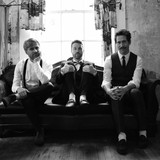 Jukebox the Ghost's latest record, Off To The Races, is a giddy, vibrant collection of Jukebox the Ghost's most bombastic, colorful songs to date. Now revamped with deluxe edition featuring acoustic versions of each track and four brand new singles, the fifth studio outing from this long-running trio of piano pop wizards plays like an energetic debut album. It's as eager to please as it is to surprise you. Every generation has a band that puts a fresh twist on piano-rock, and Jukebox the Ghost’s latest studio offering serves as a memorably vivid and kaleidoscopic step forward for the genre. Off To The Races is their fifth studio outing, mostly recorded at Studio G in Brooklyn and engineered, produced and mixed by Chris Cubeta and Gary Atturio (two exceptions: “Everybody's Lonely” was produced by CJ Baran and Peter Thomas and “Fred Astaire” was produced by Chris Wallace). Longtime fans will hear little bits of past Jukebox the Ghost embedded in the record blanketed in a fresh, more colorful sonic palette. The flamboyance and quirkiness of Let Live & Let Ghosts (2008), the retro sensibility of Everything Under the Sun (2010), the concise modern pop smarts of their recent self-titled album (2014) and Safe Travels (2012) and the raw live energy of their live album Long Way Home: Live (2016) are all on full display if you listen closely.