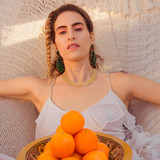 Saudi Arabian singer and songwriter Tamtam is based between Los Angeles and Riyadh. Her sound is not one to put in a box, but you can hear Alternative R&B and Pop influences. Her single “We’ve Got Wings”, released in late 2015, helped promote a Saudi Breast Cancer awareness organization founded by Princess Reema bint Bandar. “Gender Game” is a song about her journey as a Saudi woman pursuing a music career. In 2017, she released “Identify Myself” with lyrics of encouragement towards identifying ourselves as human beings first. Her defiant single “Rise” released in 2018 reached over 1 million Youtube views. In 2019 she released her EP “Rough Around the Edges”, and she performed her song “One Earth” at the Global Goals World Cup in NYC. She has released two collaborative singles in 2020,

“Heartsick” is co-produced with Saud, a fellow musician from Saudi, and it is about how connected all human beings are; and "Romantic Encounter", an alternative bilingual track with Saudi band Arabian Alien. This year, she's already been featured on acclaimed French producer Dioscures' new album "Ciela", a song called