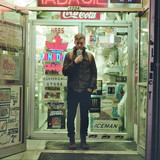 Dead Horse Beats is the stage name of Canadian musician, composer and singer Patrick Wade. Originally from Halifax, now in Toronto via the Rocky Mountains and Montreal, Wade’s music has been described as “a groovy treasure packed with the excitement and emotion of a danceclub makeout session” by Vice, and "a unique brand of hazy soul that blurs the line between electronics and live instrumentation. " by TurntableLab. His releases with labels in Montreal, New York and London span moods and styles from eccentric trip-hop to pensive R&B and rattling disco tinged dance numbers. As well as a producer and songwriter, Wade’s resume as a composer for film and video includes projects in partnership with the likes of the Royal Winnipeg Ballet and scores for award winning films that have toured the globe. Wade’s latest album Inglaterra, released in 2019, is available everywhere.