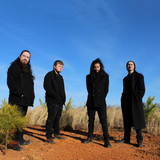 Passion, perseverance, and dedication. These are three words that best describe the history and attitude of Half Past Dead. Hailing from the streets of Richmond, Virginia, Half Past Dead is the hard rock dreamchild of four outcast musicians with a vision. Centered around punchy guitar riffs, intensive drums and bass, electrifying vocals, and impactful lyrics, the quartet of misfit rockers create music that is both hard-hitting and heartbreaking. HPD fosters a big-picture perspective on life and strives to show the world to care about what matters most in it. In March of 2020, Half Past Dead dove straight into the process of recording their first full-length album titled "Kiss The World Goodbye". With a fresh set of new band members, HPD is ready to return to the spotlight! Half Past Dead has released three singles from their upcoming album! Listen to The Evil That You Make, Show Me The Way, and The Deal on YouTube and Bandcamp! In the summer of 2021, Half Past Dead embarked on The Flash Tour with with Abby K in which they performed from New Jersey to North Carolina!