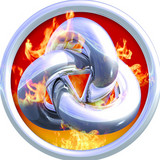 the first CD ' Endless World ' came out with the label Adrenaline/STEELHEART RECORDS and they perform in different venues to promote the album that is distributed with good results also in Japan. In 2010 the band releases, with the German label ROCK IT UP RECORDS, the second CD ' Invisible ' and returns on the stages to promote it. In 2016 Perpetual Fire signed a new record deal with SLEASZY RIDER RECORDS for the release in May 2017 of the third CD ' Bleeding Hands ' which had nine new songs plus a very personal version of ' Tush ' of the ZZTop. In July 2017 the band joins the Metal Festival ' Rock Inn Somma 2017 ',