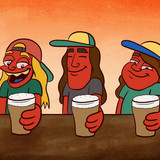 A party-hearty fusion of middle-finger punk attitude and unapologetic hard rock guitar raunch, Dune Rats are part of a long tradition of snotty, good-time, punk-adjacent bands from Australia. Playing fast and loud like their forebears, Dune Rats throw in a playful tunefulness that keeps the songs punchy and engaging, as well as a broad sense of humor that's as effective as it is immature. 2017's The Kids Will Know It's Bullshit is a strong introduction to their particular brand of rock action. Dune Rats formed in Brisbane, Australia during 2011 when two stoner buds, guitarist/vocalist Danny Beausa and drummer BC Michaels, decided to make a bunch of lunkheaded punk noise together. They performed shows with various friends roped in to play bass and released a couple of EPs, Sexy Beach and Social Atoms, during their first year together. They continued a steady stream of live shows and singles over the next two years, releasing "Fuck It" in 2012 and "Red Light Green Light" in 2013, while the Smile EP also came out that year. By this point, Brett Jansch, a member of fellow Brisbane group Bleeding Knees Club, had become a fixture on bass. Dune Rats recorded their self-titled debut album in 2014, releasing it on their own Ratbag Records imprint. The stripped-down, party-time punk sound connected with fans in Australia, leading to the band getting slots at prime festivals, including Laneway in 2015. Their second album, The Kids Will Know It's Bullshit, was produced by FIDLAR's Zac Carper and opted for the same no-nonsense, all-fun approach. It was released on Ratbag in early 2017. For album number three, Dune Rats traveled to California to record with producer John Feldmann, best known for his work with blink-182 and 5 Seconds of Summer. 2020's Hurry Up and Wait was cleaner and more precise than their earlier releases, but no less frantic or funny. ~ Tim Sendra, Rovi