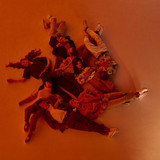 For as long as Sofie Tollefsbøl can remember, she’s been surrounded by music. “I started checking out Ella Fitzgerald and Billie Holiday, those kind of artists. Then I found Erykah Badu and D’Angelo. It seemed like the perfect mix of everything I’d been loving for so long”, Sofie recalls. Over time, the band naturally grew as Tollefsbøl added friends from music school and artists. Now after five years of writing, playing, and honing their sound, Fieh – has ten fierce, punchy soul songs ready to unveil to the world. The band is now an eight-piece, alongside the original trio of Tollefsbøl on vocals, Andreas Rukan on bass and Ola Øverby on drums, there are Jørgen Kasbo on guitar, Edvard Synnes on keys, Lyder Øvreås Røed on horns and trumpet, Solveig Wang on backing vocals and Moog, and Thea Arnesdotter Lien on backing vocals.

Live, the band are a revelation. Gifted instrumentalists who hark back to the age of smoky clubs, passionate fans, and musicians who lived and breathed their craft. Taking their cue from some of those greats, their songs have plenty of grit and fuzz, a rough-hewn quality that adds warmth and character. Fieh have poured all their influences into their debut album, a modern, youthful record that burns with attitude and the tight-knit bonhomie that comes from teenage friendships. The band are a close-knit musical collective finding its voice and eager to make their mark on the world at large.