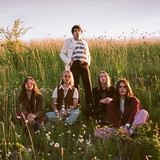 The Macks are a rock and roll band from Portland, Oregon. Formed in 2015, brothers Ben and Josef Windheim, Sam Fulwiler, and Bailey Sauls released their debut full-length album Camp Poppa in December, 2017. After a year and a half of touring including a national summer tour, the band released their second record Yup in November 2019. Playing now with bassist Aidan Harrison and adding Jake Perris on keys and backing vocals, The Macks hit the studio hard during quarantine, exploring new sides to their sound for their upcoming studio record, to be announced.