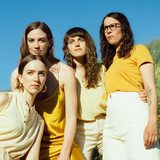 Playing your first proper live show in a year at the world’s most prestigious festival is, by anyone’s standards, a bit of a gamble. For The Big Moon, the decision to return to the stage and debut material from their second album, Walking Like We Do, during a secret set at Glastonbury 2019 proved to be the latest in a long line of risks that have paid off. Ever since lead singer and songwriter Juliette Jackson started the band, back in 2014, the London-based quartet - made up by Fern Ford on drums, Soph Nathan on Guitar and Celia Archer on bass -

have consistently gone with their gut, following what feels right rather than what’s easiest. At a time where guitar-based indie had fallen out of favour, they were credited with breathing new life into the genre, and were awarded a Mercury Music Prize nomination for their 2017 debut, Love in the 4th Dimension. Released Jan 2020, WLWD represents a giant leap forward for The Big Moon. Rich in tight-knit vocal harmonies and rolling grooves, it’s a cinematic but innately hook-laden set that truly expands the band’s range. Jackson says: “We made these songs to provide listeners with some release. It took us a while to realise we could do anything on this album, and feel confident with our own voices. But I realised that there is strength in our character, lyrics, and in the decisions we make.”