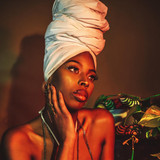 Teshay Makeda fuses Reggae, Soul and RnB to create her own dynamic genre dubbed ’Roots Soul'. Raised in South London, and influenced by her Rastafarian upbringing, Teshay Makeda uses her music to spread messages of divinity and higher power. Her songwriting is a vibrant, contemporary take on expressing spirituality through song. Enlightened polyphonic prayers and meditative chants groove on top of punchy, uplifting beats and catchy melodies. Known for her powerful vocals, Teshay Makeda’s voice exudes her purpose to heal, ground, and connect with her listeners. In 2019, whilst Makeda was a Roundhouse resident artist, she released her debut single ‘OMG’, receiving airplay from reggae pioneer David Rodgian on BBC 1Xtra and Don Letts on BBC 6 music. Since then, Makeda has been awarded the AWSL Music Award 2020 for ‘Artist of the Future’, alongside nominations for

‘Best Newcomer’ by Boisdale Music Awards and ‘Best Live Performance’ by the Youth Music Awards. With the help of the PRS Sustaining creativity fund, Makeda has recorded her highly anticipated 8 track EP ‘Omega Mother Goddess’. Due to be released in 2021, this EP is an exploration of the Roots and Soul of the 'Divine Feminine', providing a quirky introduction to Teshay Makeda’s Jamaican influenced London twang. Influences include Jah9, Lauryn Hill, Erykah Badu and Greentea Peng reflecting the socially conscious responsibility Makeda embodies through her role as a performer.