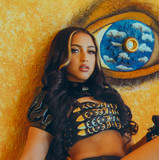 Just like any other 21-year-old, Mariah Angeliq is navigating the growing pains of adulthood, relationships, and the ups and downs of life. The only difference is that she is an acclaimed multi-platinum superstar and one of the most influential female voices within the Latin urban genre. Mariah, also known as “La Princesa de Miami” (The Princess of Miami), is a young reggaeton, trap and R&B artist of Puerto Rican and Cuban descent born in Miami whose pop/urban/R&B mix and fresh lyrics are fierce and full of girl power. The bilingual singer-songwriter is the hottest LatinX revelation of her generation. She was discovered at 16 by multi-platinum music producer Nely “El Arma Secreta”. In 2018 she signed a full management deal with GTS and recording contract with Universal Music Latin Entertainment. Thanks to the hit single “Perreito,” she became one of the few TOP-PERFORMING LATIN FEMALE ARTISTS OF 2019, at the time reaching over 5 MILLION MONTHLY LISTENERS on Spotify and charting virally in 18 countries. With over 175 million views on YouTube and influencing millions of fans on social media, Mariah also became the only rising Latin female artist to receive an RIAA 2x Multi-Platinum Certification for her international hit single “Perreito” in 2020. “At only 21 years of age, Mariah Angeliq is already considered one of the most important and influential female artists within the urban genre” – Billboard