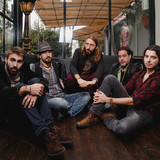 The Grassland Sinners is a classic rock band born in Barcelona by the end of 2015. After winning a handful of band-contests and publishing their debut album 'Let It Ride' (2017), the group performed live across 40 spanish cities, sharing the stage with bands like '77, Still River, Rodeo Rose or The Mothercrow, and ending the Let It Ride On Tour '17-18 at the Rock Pels Xuklis Festival in Barcelona (June 2018). Both the 'Let It Ride' album and their live shows have received many positive reviews by audiences and music mags such as Ruta 66, Rock Estatal, Rock On Magazine or Dirty Rock Magazine, among others. After a change of members by the end of 2018, the band's current line-up is: Jacin Castrillo (lead vocals, from Bigday Breaker), Aleix Lozano (guitar, from Willy & The Poorboys), Ferran Bruach (keyboards, from El Hermano Malaquias and Please U2), David Mani (bass, from The Golden Grahams and Electric Boots) and Edu Rodriguez (drums, from Onyric Joy and Rock The Night). In 2019 they present the single 'Another Flavor' and begin the new Back On Tour '19, through main Spanish cities, and having the best possible tour finale: playing at Calella Rock Fest (Barcelona) and Back To School Festival (Ibiza) in October 2019. Likewise, they're already working on their second studio album. If you like raw and vintage rock'n'roll, you cannot miss the Sinners. They kick some serious ass!