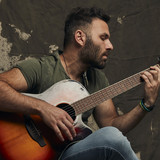 Kyriakos Gabriel Varnava's debut singles represent his emotional reactions to the internal and external fights and dead ends. The lyrics refer to several hidden images, illusions and allusions of his world and are fused with the rustic sound of his vintage guitar. These two singles will be included in his upcoming album "Lift me up", which will be released in 2021. Kyriakos Gabriel Varnava was born in Cyprus, studied at Aristotle University of Thessaloniki, Greece and moved to New Zealand in 2015. Make sure to follow him on Instagram , Spotify, and YouTube for his upcoming album. I'm Not YouFar from HomeDeep Within