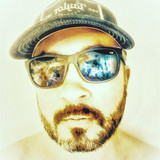 Hi, my name is Jake Mimikos aka The Frontier. I'm a singer/songwriter from Reseda, CA, which is a neighborhood in the San Fernando Valley. I moved to the East coast when I was very young and have been making music on and off here for about 10 years or more. This project began in 2015. Originally, The Frontier was going to be just a casual side project for me, but it turned into something much more than that. I met my current producer Austin Bello (Forever The Sickest Kids) after I released my first single online. Now, after many more releases, sync licensing deals (The CW, MTV), and fans around the world, the songs are still coming. All of the music is very personal to me. Some of the lyrical content is tongue-and-cheek, but for the most part I write from personal experiences I have gone through. Stylistically, the songs vary from rock to indie/pop and folk. I hope you will stick around to see what comes next.