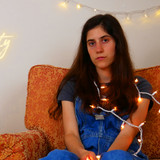 Slow Dress’s sound is as accessible as it is unnerving—an honest reflection of vocalist Katie Solomon’s thoughts on the uncertainty of life, love, and her emotions. Writing for Slow Dress, Solomon reaches to express the complexity of her often conflicting feelings. Over Bredon Jones’s intricate guitar lines, Solomon explores her fears with wrenching vocals and an evolving self-understanding—evoking the sauntering, emphatic sound and confessional lyrics of artists like Julia Jacklin and Lucy Dacus. Tackling personal and existential questions with a sprinkle of apocalyptic dread, Slow Dress navigates the contradictory nature of being human. Solomon and Jones met at an open mic night at the Lizard Lounge in Boston. Jones was immediately drawn to Solomon’s voice—described by Allston Pudding as being “rightfully compared to the likes of Kate Bush and Florence Welch.” From 2016 to 2019, the two played together in Boston band Jakals, gaining a reputation as a band that “covers tough stuff,” as Allston Pudding put it. After deciding to break off and form Slow Dress, they honed their uninhibited storytelling, trading in sonic heaviness for lyrical and musical intimacy. Zach Wulderk, formerly in Jakals, joined on bass, followed by Julia Mark, a singer-songwriter from the Boston area, on keys and backing vocals. Support them directly for $3 /month on Ampled, an artist- and worker-owned cooperative platform! https://www.ampled.com/artist/slowdressmusic