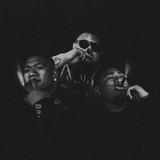 HP BOYZ have set the Australian music scene ablaze.  The independent Hip Hop group from Hampton Park, Melbourne have a unique sound and look that has propelled them up the charts. With over 150 million streams across their platforms they trended in the number 1 spot on YouTube with every single release.  They sold out 7 concerts in under 10 minutes in New Zealand and have scored 1 platinum and 5 gold singles in just 2 years. HP Boyz were nominated for New Zealand International Artist of the Year and won the People’s Choice award at the ‘Pacific Music Awards’.  YJ, Mways and Onit formed a brotherhood in primary school. Over the years they would hang out together, freestyle rap and create tracks. This brotherhood has seen their dream evolve into a hugely successful group, where they love releasing songs for their fans and showcasing their unique style.  HP Boyz are different from everyone else. This is why they stand out. Their passion for their music and craft, combined with their unique music sees them go from strength to strength.