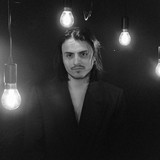 Seb Lorez is a Zurich-based artist. Active in the local music scene for several years, he has been releasing songs and playing shows since his debut release "Slide Away EP" in spring 2019. Saying he is a pop artist wouldn't do justice: He infuses straightforward drum-machine rhythms with complex synth patterns, always leaning towards a blend of surf rock and '80s sound aesthetics. He might drift far off at times, but listening, you always know exactly where you are. His warm vocals, though sometimes pitched, ground you and tie his musical diversity together. As a teenager, Seb Lorez drummed in two punk bands, wrote songs and played in front of audiences for the first time — he was immediately hooked. On the way to finding his voice, he experimented with sounds and gained live experience. Since his debut EP “Slide Away” in 2019 and the singles ”Don’t Tell Me You're Sorry” and I Hope You Know” in 2020, he performed live all over Switzerland and opened a sold-out Volkshaus Zurich for James Morrison. Seb reached playlist placements like ”Van Life” or ”New Music Friday” on Spotify and “Pop Au Lait” on Apple Music. He was nominated for the final of the m4music Demotape Clinic.